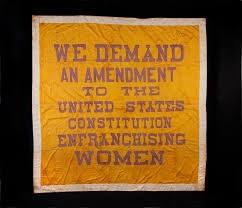 The number of exhibits and celebrations planned to celebrate the 2020 ratification of the19th Amendment is growing. These are just a few planned for Washington DC; we trust there will be more to come, both throughout the region and the nation.

At the Library of Congress:

Shall Not Be Denied: Women Fight for the Vote. Memorabilia of suffrage leaders, from Carrie Chapman Catt’s notebook in which she tracked the amendment’s ratification state-by-state to pins, buttons, fans and even song books. Also look for the stories of the African-American suffragists that were so often hidden from view. Through September 2020. 101 Independence Avenue, SW, Washington DC. 20540. 202-707-5000.

At the National Portrait Gallery:

At the National Archives:

Rightfully Hers: American Women and the Vote.  Displays, among other artifacts, a voting booth with entrances for men and women. Such booths were used in states where women had limited voting rights and guaranteed they could only vote in certain contests. Through January 3, 2021. 700 Pennsylvania Avenue, Washington, DC, 20408. 202-357-5946.