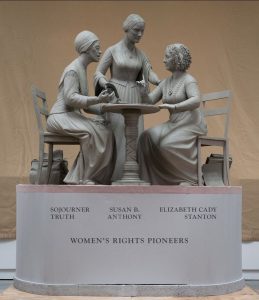 After years spent securing a site, raising funds, approving and disapproving designs, and much deliberation, New York’s Central Park will finally have a statue depicting real women, a bronze monument honoring three women pioneers who worked tirelessly to secure the right to vote for women throughout the nation.
The original design had depicted Susan B. Anthony and Elizabeth Cady Stanton, but this new design includes suffragist Sojourner Truth as well, thus representing the contribution of African-AMerican women to the suffragist cause.
The monument by artist Meredith Bergmann will break what some call the “bronze ceiling” in the 166-year-old park — the lack of sculptures honoring real women, and will be dedicated on August 26, 2020, marking the Centennial of the Ratification of the 19th Amendment.