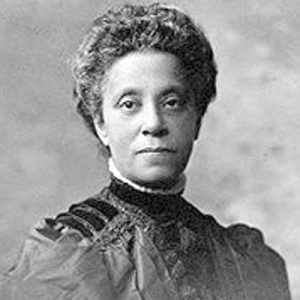 Quite often the work of African-American suffragists went unrecognized, hidden in plain view by the work of others, but the contributions they made to the movement were no less meaningful or important. In addition to being an avid suffragist, Gertrude Bustill Mossell held the rare position of an influential journalist, and was able to use her position as a writer for a prominent African-American newspaper to give voice to the ideas of other Black women who advocated for suffrage.

Gertrude Bustill was born July 3, 1855 to a prominent family in Philadelphia and attended public schools. After graduation she taught in the public school districts in Philadelphia and New Jersey, while at the same time beginning her career as a journalist, contributing to several newspapers in Philadelphia, giving the Black woman’s point of view of the important issues of the day. In 1883 she married Nathan Mossell, the first African-American to receive a medical license from the University of Pennsylvania. The couple had two children.

In 1885 Gertrude became the woman’s editor of the New York Age, a prominent African-American newspaper, and continued to report on issues of interest to her contemporaries; in that same year she began writing a woman’s column for T. Thomas Fortune’s Black newspaper, The New York Freeman. Her first article for the Freeman was entitled “Woman Suffrage,” where she encouraged African-American women to familiarize themselves with the movement, and to get involved in working for its success. Mossell favored the Constitutional amendment route favored by Susan B. Anthony and Elizabeth Cady Stanton over the state-by-state method favored by Lucy Stone. She also encouraged women to become journalists themselves, to write and submit articles to various publications, expressing their own views about current events, including suffrage.

Mossell and her husband also supported philanthropic causes; in 1895, they establishing Frederick Douglass Memorial Hospital, the second private Black hospital in the nation. Her articles inspired her most successful publication, The Work of the Afro-American Woman, in 1894, a survey of the century’s Black female leaders, from poet Francis Harper to scholar Anna Cooper.

Gertrude Bustill Mossell came from a comfortable family, and could have spent her days in leisure. Instead she chose to give voice to the often-ignored African-American woman suffragist, and in so doing helped to have her influential voice heard as well.

Posted in Suffragist of the Month